The book format is pdf file. 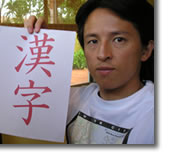 Hi, my name is Takanori Tomita.

Are you always fascinated by different cultures especially with Japanese history?

If so, let me explain about the Japanese historical phrase or Japanese saying called "Yo Ji Jyu Ku Go".

These phrases are still accepted for everyday use, like in newspapers and ordinary reading matter or most often in a school textbooks.

Especially with scholar, politician and sometimes commentator speak to use them in a usual conversation.

For example, the following "Yo Ji Jyu Ku Go" means,Fight with one's own shadow, and can be represented like this:

In Japanese, it is pronounced " Gi Shi N An Ki".

Today, there are over two thousand Japanese kanji accepted use in Japan.

Like "Yo ji Jyu Ku Go", kanji itself represent meaning in an expressive way.

However, there are also 2 other scripts we use in everyday of our life.

They are called, Hiragana and Katakana.

Hiragana is basically more cursive or rounded way of writing and indicates both the shape and relative simplicity of the scripts.

Have a look at this Japanese saying:

This time, the Japanese phrase is not only KANJI.

Although Kanji symbols are used to express the main concept of this phrase, Hiragana is also used to write the grammatical parts of sentence.

They are a subordinate characters.

What sort of phrases are they?

The following is the meaning of each Japanese phrases that are included in this ebook.